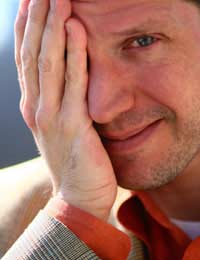 Blepharitis is a common complaint and can affect anyone of any age, but is more often seen in older generations. It is a term given when the eyelids become sore and inflamed, causing irritation and discomfort. It can affect only one eye, but usually involves both and is not often an isolated problem and can become a persistent and recurring problem

Blepharitis may be caused as a consequence of other disorders but may have no obvious reason for its occurrence.

Blepharitis can be seen as an effect of other complaints such as eye infections which cause some of the tiny ducts in the eyelids to become blocked leading to the inflammation.

Blepharitis occurs as the eyelids become inflamed, often as a result of an infection or because of injury to the eye.

Initially the person may feel an irritation in the eye and symptoms have been described as grittiness in the eye or as if there were a foreign body in the eye. The edges of the eyelids may feel itchy and irritated often causing people to rub their eyes which increases the inflammation. As the condition develops, flakes may appear on the base of the eyelashes and crusting can develop. It is often worse in the morning, sometimes with the person finding difficulty in opening their eye without bathing it first.

There is no single cure that will alleviate this problem, but symptoms can be eased using a variety of methods.

Keeping the eye area clean and free from germs will help to decrease inflammation. A simple clean face cloth or cotton pad moistened with warm water will often be sufficient in helping to soften deposits allowing them to be removed more easily.Using the finger tips and small circular movements, the eye area including the eyelids can be gently massaged to help encourage fluid build up in the ducts to be released allowing them to be cleaned away.

Repeat this when needed until symptoms have eased, then repeat daily to prevent recurrence.

If the eyelids have become infected, seek advice from your GP who may recommend the use of anti-biotic therapy.

During episodes of blepharitis it is advisable that make-up is avoided as this can prevent the fluids from being released causing them to build up in the fine ducts of the eye, increasing inflammation and the risk of infection.

In some cases, the condition may not be prevented but there are certain measures that can be taken to help reduce the likelihood of blepharitis occurring. Treating hayfever, asthma and allergies effectively will help to lessen the chance of an episode, as will using eye make-up formulated particularly for sensitive eyes. If eye make-up is worn, it is important to remove it thoroughly every day or night in order to allow the eyelids to 'breathe' and prevent fluid build-up.If you work in an atmosphere heavy in chemical usage, always use protective eye wear and take regular breaks away from the affected air. Use artificial eye drops (tears) if needed throughout the day to reduce dryness and decrease the chances of the eye feeling gritty.

Getting enough sleep and drinking plenty of clear fluids daily will also help to reduce dryness of the eyes and allow for toxins to be flushed through.

Blepharitis is a common condition that can be very irritating for the sufferer especially as is tends to be a recurring problem. Fortunately it is not serious and should carry no long terms effects.

Iritis Explained
Share Your Story, Join the Discussion or Seek Advice..
I am 47 But my eyes are Bleared vision and watering of a morningand night but I do wear glass for short vision -but I try not to stress my eyes - what can I do to help health and vision of my eyes? and what should I eat?
AL - 22-Jul-13 @ 10:20 PM
I suffered from Blepharitis for over a decade. In that time I had two operations to have lumps removed from my upper lids once the infection and swelling had gone down. I was given alot of advice on how to treat it but it would come back again. Then I read somewhere to avoid soaps except neutrogena on my face. Now I just use water to wash my face and avoid any contact with soap except sometime neutrogena. Also if my eyes feel sore use large cotton pads with boiling water poured on, hold on a spoon and steam the lids, when it's cooler compress the same pad onto the eye for five minutes, then use a cotton bud dipped in a diluted solution of johnsons baby shampoo to clean the lids. It's been years now since I do this and have never had a problem with Blepharitis since.
Matt - 10-May-12 @ 9:18 AM
Title:
(never shown)
Firstname:
(never shown)
Surname:
(never shown)
Email:
(never shown)
Nickname:
(shown)
Comment:
Validate: