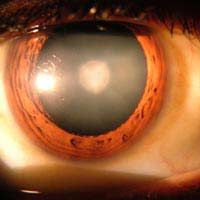 Julia was 72 when she had her first cataract operation. “I had found it difficult to see for more than a year and I was amazed that the day after the operation, I could see perfectly. It was like having a veil lifted from my eye,” she says.

So, three years later, when her other eye began to cloud with a cataract, she had no hesitation in getting on the waiting list for another cataract removal. “I couldn’t wait and it was only three months this time and I was in. The operation is very quick and you don’t have to stay in hospital. I arrived with my daughter at about 8am, the operation was at 11am and I was home at 3pm,” she remembers.

Not Such a Miracle

Although Julia could see better the day after her second cataract operation, she soon realised that something was wrong. “Instead of everything being crystal clear, there was a sort of fuzzy halo of light at one side of my vision and this made it difficult to watch television and the glare from the sun was uncomfortable. A few days later, she went to see her optician and he examined the eye that had recently been operated on using an ophthalmoscope.

“He immediately saw what was wrong. When a cataract is removed, the whole natural lens of the eye, which has become opaque, is removed and replaced with an artificial lens. This is placed in the membrane that holds the natural lens, so that it stays in position. In my case, then lens had moved slightly so that it was sitting off-centre. The halo I could see was the edge of the artificial lens,” explains Julia.

Cataract operations are very common in the UK and the success rates are very good. Only about 1 per cent of operations result in some sort of problem and lens dislocation is one of the most common. In some cases, the lens dislocates completely, and the lens ends up at the back of the eye, behind the eyeball, but this is very unusual. It is more likely that the lens is slightly out of position, as in Julia’s case, where it causes diffraction effects and halos, as the edge of the lens bends the light in a different way to the main body of the lens.

Dislocation of the lens can happen early on, within a few hours or days of the operation, or it can develop sometime in the first three months after surgery. Rarely, late dislocation can occur, some months after surgery. It can happen for no reason, but it is possible that rubbing the eye can make the lens move out of place, particularly before healing has taken place.

When the lens dislocation is severe, it may be necessary to carry out further surgery to correct the position of the lens, or to replace it with yet another new lens, placed correctly and perhaps with a small stitch to hold it in place. Surgical treatment is also indicated if the lens is causing inflammation in the eye, because it is rubbing against the side of the eyelid. “In my case, the solution wasn’t as drastic. I had to have some sort of sight correction anyway, so the optician gave me special glasses and a contact lens so that the sight in that eye is now completely normal. I can see well again and I am still very happy I had the cataract op,” Julia reports.
Next Page