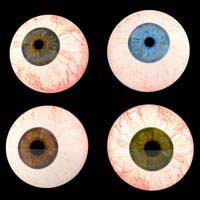 People can have various eye colours; brown is the most common, followed by blue but grey, green, amber and hazel are also common variations. Eye colour originates in the iris of the eye and is due to the amount of the black pigment eumelanin that is produced in the melanocytes there. The actual colour of the eye depends also on the density of the pigment and where it is located within the iris. The cells are structured in several layers, and the position of the pigment within these layers affects the way that light reflects from the eye. The pigment is the same whatever the eye colour but an additional pigment – the yellow compound lipochrome – is found in some grey and green eyes.

In green eyes, the pigment tends to be towards the back of the iris, so that the predominant colours are blue and yellow; brown eyes occur when there is a greater density of pigment at the front of the iris.

The Genetics of Eye Colour

At various times in history, people have theorised about how eye colour is passed on from parents to children but the genetics are not as simple as was once assumed. It used to be thought that if one parent had blue eyes, this was the dominant colour and all children born to or fathered by that parent would automatically have blue eyes. We now know that is not the case – the genetics of eye colour is far more complex. This knowledge may have saved a lot of disputes over children’s parentage in the past, but it is a feature that is no longer taken into account when trying to determine paternity.

When babies are born they tend to have dull, blue-grey eyes because they have very little pigment in their irises. Babies tend to have little eumelanin or melanin at birth – this is produced by the melanocytes later on. At about 3 months, most babies start to develop their eventual eye colour. The final eye colour is usually stable by the time a child is a year old. The production of melanin in the skin follows the same pattern, building up over the first two years of life. This is why babies are born without many freckles or beauty spots – they develop them gradually.

The most common eye colour in the world is brown – more than half of the world’s population has brown eyes. Blue eyes tend to predominate in the Scandinavian countries and many parts of northern Europe, although human migration during ancient and recent history makes this very much a generalisation. This effect is seen more obviously in the USA, which was populated by settlers from Europe initially, but has become much more multi-cultural in the last 125 years. The proportion of people having blue eyes has fallen from about a third in the early 1950s to about a sixth today.

It is rare but possible for someone to have two eyes that are different colours. This can be something that develops naturally from birth, or can be the result of damage to one eye during early life, or it can be due to an inherited syndrome that also has other symptoms. The two eyes have different amounts and distributions of eumelanin in the iris and so look completely different colours. The singer David Bowie famously has two different coloured eyes.

It is also possible for someone to have one eye with a slice or portion of the iris that is a completely different colour. Someone with grey eyes can have a portion of one eye that is brown, for example. One theory is that a viral infection in the womb turns off one of the eye colour genes in one of the foetal cell pathways during development, resulting in the different colour pattern.

What is the Blood Retinal Barrier?

Questionnaire: How Well Do You Know Your Eyes?
Share Your Story, Join the Discussion or Seek Advice..
David bowie does NOT have two different eye colours. He has a fixed DILATED pupil in one eye because of childhood trauma when hewas a teenager!
duckie - 25-Sep-13 @ 10:06 AM
Title:
(never shown)
Firstname:
(never shown)
Surname:
(never shown)
Email:
(never shown)
Nickname:
(shown)
Comment:
Validate: