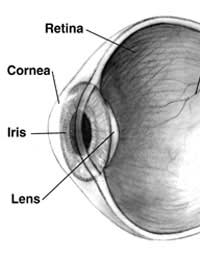 The sense of sight is possible because the eyes contain specialised structures and cells that convert light from the outside world into electrical impulses. When these are sent to the brain, visual centres in the cortex then interpret and process them into an image. The accuracy with which we see what is in front of us depends on the different cells in the retina, the light sensitive layer at the back of the inner eyeball, and the different nerve pathways involved.

The first step to understanding how colour vision is possible is to look at the types of cells that make up the retina.

Structure of the Retina

The retina is a layered tissue that contains a complex and intricate blood supply. It is protected by the orbit of the skull and signals received from light that enters the eye through the pupil are sent to the brain via the optic nerve, which leaves the retina at the back. The cells responsible for detecting light are called photoreceptor cells and there are two types; rods and cones. The rods are mainly responsible for our vision in dim light and they detect shades rather than colours. We are able to see colours because of our cones.

Rods and cones are both light sensitive modified nerve cells. The back end, which connects to other nerve cells looks like a nerve cell but the light sensitive end looks a bit like a mini-light bulb that has been elongated. This part of each photoreceptor cell is on the upper surface of the retina, where it can pick up light that is focused through to the back of the eyeball by the lens. The bulbous part contains pigments that change shape when light falls on the cone cell.

Cones: a Close Up

The human eye has three types of cone; one that is sensitive to blue light, one for red light and one for green light. Each one has a slightly different light sensitive pigment that responds to these wavelengths of light. People who are colour blind are usually lacking one or more of the different types of cones, so they can’t see one or more of the colours of light. The fact that three types of cone are involved in colour vision was predicted back in the 1700s, long before the different types of cell were known. It then took until 1956 for the Swedish physiologist Gunnar Svaetichin to prove the trichromatic theory of colour vision by explaining it in terms of cones.

Where are the Cones?

Most of the cones are concentrated in the central part of the retina called the fovea but there are not equal numbers of the three different types. Blue cones only make up about 2% of the total and most of these lie outside the fovea. The red and green cones dominate with red making up 64% and green 32% of the 7 million cones packed into this tiny spot on the retina.

How Does Colour Vision Happen?

When light of different colours falls on the retina, the cone cells most sensitive to different colours of light undergo a change. The bulbous part of the cone cells is packed with a pigment, a specialised protein called rhodopsin, and this changes shape when it is exposed to light. Each rhodopsin molecule contains two components; a protein called opsin that is rooted in the cell membrane and another protein called retinal, which is sticking into the middle of the cell. As light falls on the rhodopsin, the opsin part changes shape and sets off an electrical impulse in the cone cell membrane. This is passed down the cell to the part that's most like a nerve cell. The electrical nerve impulse is passed from here to other nerve cells, off down the optic nerve to the brain.

Retinal is made from vitamin A – which is why not getting enough vitamin A leads to night blindness as the cells in the eye cannot pick up light very well in very dim conditions. This is where the old saying that carrots help you see better in the dark comes from – they contain quite a bit of vitamin A and could help reduce night blindness in someone who was otherwise short of vitamin A in their diet.

Visual processing is a very complex area in biology but, to cut a long story very short, as the signals pass through the optic nerve to the brain, complex networking systems and processing systems untangled the messages so that we see different colours.