Home > Ask Our Experts > Itchy, Sticky Eyes: What Could Be the Cause? 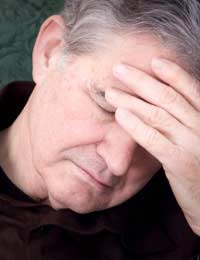 Q.My father, who is in his early seventies suffers from itchy, sticky eyes that he struggles to keep open. He often has to hold them open to see around. He has had the same problem for at least the past ten years despite being in excellent health in all other areas. He does not suffer from allergies and never has. The eyes often appear a little red and inflamed and I believe they sting when open, although his actually sight is not affected. It looks almost as if he has more eyelid than necessary, although they are not swollen, or at least do not appear to be. The doctor did not appear to have a firm diagnosis.

Eyes that are itchy and weep often can be very uncomfortable and distressing for the sufferer and it is important that any problem with our eyes is checked out by a professional and diagnosed.

If you are sure that your father does not have an allergy, I believe there are two very likely possibilities that are causing the redness, stickiness and itching.If the eyelid edges are red and inflamed and sometime weep and swell the most likely cause is blepharitis which is a condition that produces these symptoms in most people. The eyelids can sometimes be difficult to separate, especially in the mornings and may need bathing to remove the debris that has built up. During the day small particles can accumulate on the eye lashes similar-looking to dandruff and this can be very annoying and disruptive for the sufferer.As blepharitis is a chronic condition it will most likely recur through out life which again is another of your father’s symptoms that indicates it could be this problem.Unfortunately there is no current cure for this particular problem and the only treatment that is usually offered is antibiotic eye ointment that can be used during flare-ups.It is important to keep the eyes clean and pairs of glasses will also probably need more attention to prevent any debris building-up or any additional bacteria from getting into the eye.

Another possibility is that your father has an episode of conjunctivitis that has not been successfully treated and there is still some bacteria remaining that is causing an on-going infection that may be worse during certain periods.Our eyes often change as we get older, and sometimes they can become more sensitive to things that have never bothered us in the past so there is also a small chance that your father has developed an allergy to something so don’t rule this out entirely.

If I were you I would seek another opinion and ask whether either of these possibilities is likely with the aim of getting some relief of the symptoms. If you are unhappy with your first consultation request to see someone different or speak to your GP about seeing a specialist.